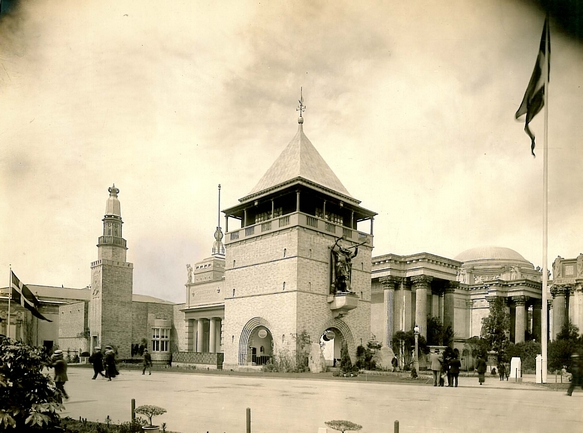 The Denmark-Building. The original blueprint included a small bastion with nine antique cannons. The bastion was abandoned on demand from the PPIE authorities as it would have blocked the view to New Zealand’s pavilion (left side). The architect then proposed to place the cannons around the flag pole, but gave up the idea after harsh critique from the left-wing paper Social-Demokraten. The California-Danes didn’t appear to be crazy about the idea either.

The large international exhibitions we know today as EXPO has been a reoccurring historical phenomenon ever since the first exhibition was held in The Chrystal Palace in London’s Hyde Park in 1851. The character of the international exposition has gone through a lot of changes over the years. Today the National Pavilions is the centrepiece of a world EXPO. But when this new feature was introduced in 1867 at the exhibition in Paris it was a complimentary addition to the main exhibition hall where all the countries had their own section of the building reserved for the exposition of industrial, agricultural and artistic products. The private companies played an important part in the arrangement of each exhibition as provider of the objects for display. This is also the case when we look at the Danish participation in the World Exhibitions.

This essay will consider Denmark’s participation in the Panama-Pacific International Exposition (PPIE) in San Francisco in 1915. An international exhibition (in the US known as a World’s Fair) in San Francisco had been suggested at least since 1904 to celebrate the Panama Canal, but the project was postponed as the work on the canal dragged on. The project finally gained official recognition from the US congress in 1911, with the official opening set for the 20th of February 1915.

The space of the PPIE’s exhibition grounds was divided into three. There was an area for entertainment, and a park with pavilions erected both by some of the single US states and by foreign Nations. The third space in the centre area were reserved for eleven grand exhibition palaces with themes ranging from art and horticulture to mining, manufacture and varied industries. 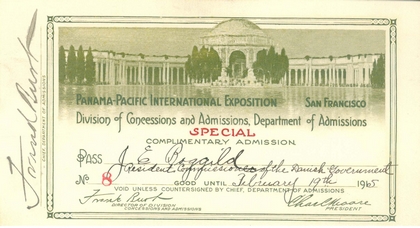 The Danish decision to participate in the exhibition was greatly influenced by the Danish immigrant community in California. In an attempt to secure official representation from the old country a society was established to raise money for a Danish pavilion as a gift to Denmark. The California-Danes proposal was reported by the Danish press even before the official invitation for the PPIE was received. It helped create broad public support to the Danish participation and further the decision even though the Ministry of Trade was sceptical towards participation and most of the business community seemed disinterested. The Danish representation at the PPIE was divided in two tiers: A Denmark-Building largely paid for by the California Danes, and a Danish section in the Palace of Varied Industries. The Denmark-Building was drawn by architect Anton Rosen from Copenhagen. He proposed a pavilion inspired by castle Elsinore, but the resulting design of the building was determined by exhibition rules and budget limits. The building had three towers and a balcony framed by a small pond. Indoors it was equipped with living rooms, posh furniture and porcelain sponsored by some Danish companies.

The Danish companies who exhibited their goods in San Francisco were all gathered in a small Danish section in the Palace of Varied Industries. This was a bit unorthodox as several of the exhibitors technically speaking belonged to other exhibition palaces.

The size and content of the section reflected the attitude of the Danish business community. Businessmen had begun to lose interest in these large universal exhibitions. For a short time it looked like the was going to be no official representation of Danish industry, but at small group of companies led by Frederik Dalgas worked hard to ensure that Denmark would be represented with an official section at the exhibition. Dalgas was director of the Faience Factory Alumina, which also had obtained ownership of the Royal Porcelain Factory (today Royal Copenhagen). During the last decades of the 19th century this enterprise created a market for its goods in the United States, and the participation in international exhibitions were seen as an important part of the effort. When Denmark chose not to participate in the Louisiana Purchase Exposition in St. Louis 1904, Aluminia led a group of Danish companies who participated in their own right.

The group of companies led by Frederik Dalgas consisted mainly of various art-industrial manufactures such as Herman Kähler, Georg Jensen and P. Ipsens Enke. They were producers of fine porcelain, faience, pottery, jewellery and silverware which were sold at the exhibition. Several of these companies had already participated in the St. Louis World Fair in 1904. Among the other exhibits included in the Danish section were works of photography, bookbinding and embroidery. Dalgas and his group of companies could not gain control over the organisation of the Danish exhibition, but they did exercise significant influence on the final result. Outsider companies that did not belong to this group were treated rather selectively depending on whether their items could be fitted in among the porcelain. Examples include a table factory that was rejected on the reasons that it belonged in the Palace of Manufacture, while theScandinavian-American Line were allowed to exhibit a scale-model ship although it technically belonged in the Palace of Transportation.

The overall result was that the Danish section was dominated by porcelain and faience, especially from Aluminia and the Royal Porcelain Factory, and it was a far cry from representing Danish industry

Text by Frederik B. Kolding
University of Aarhus, Denmark

The Danish Society for the History of Technologywishes to welcome our colleagues from the whole world to SHOT 2012 in Copenhagen with this little porcelain story on Denmarks participation in the World’s Fair Exhibition in San Francisco in 1915.

The Danish Society for the History of Technology has a tradition for publishing small Stories of Technology. Visit the webpage here (in Danish):
:: Visit here